I realized a couple of things when I came online to work on this site today. The first is that erikgrove.com is now a year old. The second is that until this morning’s blog (On Writing: Running Through the Rapids) I hadn’t posted anything in 6 weeks. It’s been even longer since I posted something about what I’m personally working on. As I’m prone to reflection, nostalgia and gratuitous bloviation, I see this as an opportunity, dear reader, for one of my generally uncommon State of the Erik blog posts. 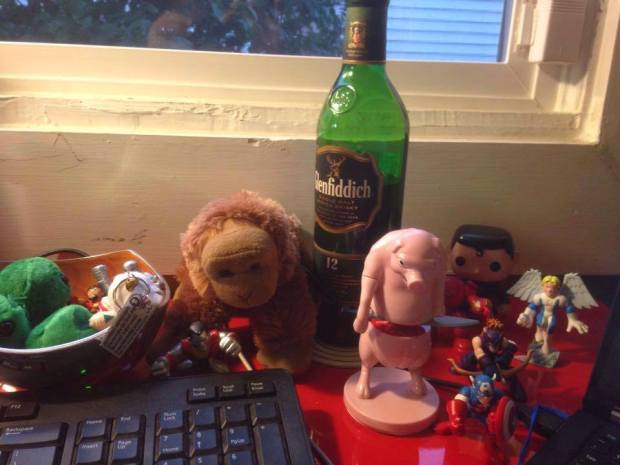 My desk, my world.

I’m about 6 months into my adventure as a full-time “I don’t really get paid to do this yet” writer, part-time “I actually get paid to do this” consultant, and quarter-time “I do it for the love” fake French Canadian mime assassin. The last six months has both gone by incredibly fast and seems impossibly dense with activity and change. I wrote a lot for a website (I linked a lot of it here but I’m missing a lot of it because reasons and shiny things) and then stopped writing for that website. Aside from the blog posts here, I’ve written a lot of fiction, most of it still in progress. I’m most of the way through a YA book about Halloween and a couple hundred pages into a great big punchy superhero epic (early draft material here). I wrote and posted a lot of short stories and also excerpts from an older not-at-all-YA project called Violent Femmes. I’ve also been developing some card games and I’ve been working on a sadly delayed podcast that’s going to be going forward this year. I’ve also taken actual real person vacations, a first for me in a long history of workaholism. 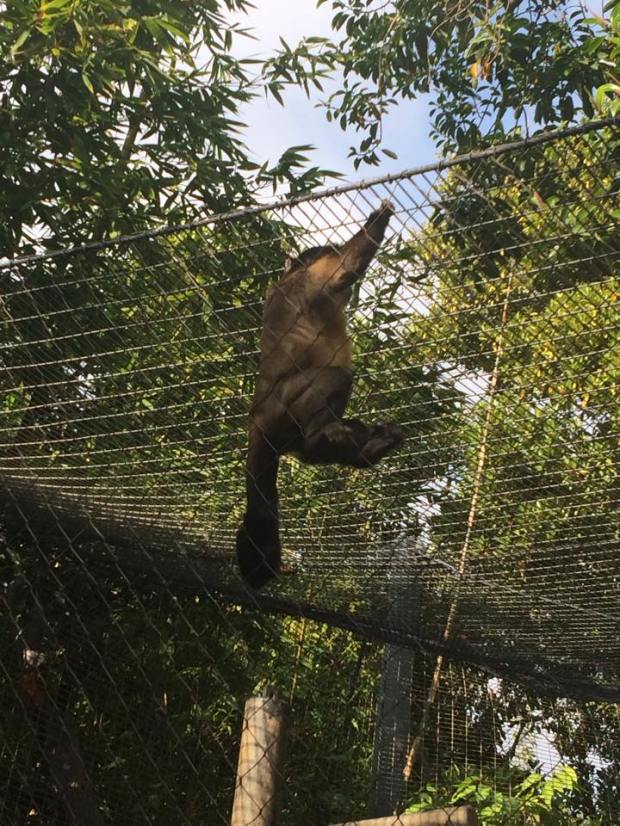 I saw monkeys! And ate tacos! So Cal sunshine!

It’s probably because of my technical consultant background that I automatically look at my life and work in term of quarters (three months, not the currency, silly) and this is the beginning of the third quarter or, in a more project manager-y speak, third phase. Phase 1 was all about deprogramming. I had to re-learn how to be a person that didn’t have a day job and a day job paycheck as the center of my universe. It might sound very privileged to talk about how hard it was to become voluntarily unemployed but the truth is that your brain starts to work in a certain way, at a certain pace with certain expectations when you tell it that the only thing it has to do is push work from one work pile to another work pile for a work boss to get a work check so you can afford the home that keeps you warm between work days. For me, my job became an ambivalent deity and I was a devoted cultist. I struggled to think beyond that paradigm but I couldn’t. Work haunted me. I had dreams about work things and found that every aspect of my personal life revolved around a job working for someone else’s goals. Some people can get work-life balance right in that kind of environment but I couldn’t. I lost perspective and it turns out I needed about three months to get that back. Going into phase 2 I knew that I wasn’t willing to go back on those same terms. The way I was working the job I had, I was doing it wrong but it took time to understand how wrong it was and what right was for me.

Phase 2 ended up being about experimentation and stumbling. I felt like I’d been in Plato’s cave and managed to get free and stagger out of my cubicle into a disorienting world. I tried to do a lot of different things and found that some worked out well and others less well. I was ambitious and bold and ultimately overstepped on a couple of things but it was a good learning experience. There were points when I was daunted and felt defeated. It’s difficult to look at all of your options and not have some outside force tell you what to do. By December I realized I needed to regroup and revisit my goals again. I resumed work on some projects I’ve set aside, I ended or paused work on some things I had been doing. It was around this point that I decided that contributing to Bleeding Cool wasn’t working for me anymore and amicably parted ways. I took some extra time out for the holidays and focused on getting my fight back for the New Year.

So now it’s Phase 3. Today is the official start – the first working day back from my vacation – and I’m feeling good, airplane cold notwithstanding. My plan is that Phase 3 is all about finishing what I’ve started and racking up some wins. I’m going to be looking at some self-publishing options again. I’m going to get that poor podcast up and kicking. I’m going to be trying to finish play-test versions of some of the games I’ve been working on. I’m hoping to finish a draft of the great big super punchy novel. I have a lot of plans to write more blog posts here – to keep material coming on a semi-regular basis. I’m thinking about doing a multiple part series or two. I have lofty goals and an awful lot of stubborn. If Phase 3 is anything like the ones that preceded it I’m going to do a lot of course correcting but I’m going to keep moving ever forward, cocky, confident or just foolish, accomplishing goals, writing words and, as always, rocking out to a pretty killer punk rock soundtrack.

With thanks and unending love for my wife, partner in crime, defender of the Oxford comma and sidekick in all things super awesome whose support and patience make everything worth doing possible