In 207 BC general Xiang Yu of the insurgent Chu told his army to cross the Yellow River and destroy any means they had to get back as they marched toward a decisive confrontation with the Qin armies in the Battle of Julu. The Qin army greatly outnumbered the Chu but, like a lot of famous battles between upstart forces and the entrenched army of the status quo, the Chu were victorious and the Qin Dynasty, the first of the great imperial Ancient Chinese dynasties and the etymological source for the European name “China”, became a foot note in the history books.  Xiang Yu’s order (“break the cauldrons and the sink the boats”)  became a legendary proverb about committing everything toward a set goal and not allowing retreat to be an option.

As I write this  from my shiny red IKEA desk in Portland, Oregon, I don’t have a lot in common with Xiang Yu but the proverb credited to him is something I think about a lot. There are a lot of similar stories about crazy generals doing crazy general things involving burned bridges and burning boats and then there more contemporary examples of crazy football coaches bloviating that “winning isn’t everything …” – well, you know the rest. There’s a whole world of Glengarry Glen Ross style business self-help affirmation that wallows in this imagery and reduces these concepts down to buzzwords and platitudes. 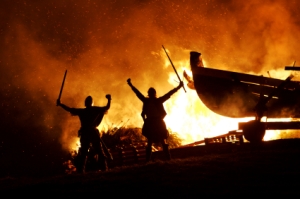 To make your sales team effective you have to be like Hernan Cortes and scuttle your ships (and come to my airport Hilton seminar)!

Macho invasion stories (that contain more genocide than I’m comfortable with) used to inspire white dudes in a white shirts with black ties “conquer” their sales quotas isn’t usually the same place I look for creative inspiration but there is a resonant truth in these proverbs that’s maybe better represented by a scene from the 1997 science fiction movie, Gattaca. In Gattaca, if you haven’t seen it or if you’ve forgotten about it because it’s almost 20 years old, Ethan Hawke plays “Vincent Freeman” (sci fi isn’t known for subtly), a man born without heavy genetic modification in a world where everyone is perfected in utero. Freeman wants to take a rocket ship up into the stars but the genetic tests they run would disqualify him. So, he devises a movie’s worth of clever tricks to fool the system and show that all you really need to succeed is gumption (and lily white skin – apparently melanin is one of the things they can prevent in the future). Anyway, the big emotional uppercut toward the end of the movie comes when Vincent explains how he’s always managed to do more than people expected from him – he doesn’t save energy for the return trip. I haven’t seen this co-opted by the business bloggers yet but I’m also not looking too hard for it.

I want to give Shankar so many high fives, you guys

My favorite new-to-me podcast is NPR’s Hidden Brain, a truly remarkable social science podcast by the coolest social science guy in – well, are there any other cool social science guys? – Shankar Vedantam. The episode from this last week about backup plans is what got me thinking about Xiang Yu and Gattaca and specifically how it applies to creating. In the podcast Vedantam introduces a lot of awesome social science goodness about how having a backup plan can not only hinder you in pursuit of your ultimate plan but can also make you more reckless. The idea is that having a backup plan, boats waiting for you get back across the Yellow River or a whole continent not filled with Aztecs just hanging out and not being genocided or a list of potential lovers if your relationship doesn’t work out, might seem safer but it also makes you more likely to need a backup plan.

So, here’s how I bring it back to writing and to any creative venture you’re ever going to do. You cannot create anything without risk. You have to risk that you can realize your vision, that people will understand and like your vision, and that you can take that vision and convince people to come listen to you talking about your vision at a bookstore or a comic book convention or the airport Hilton banquet room. Risk requires faith – or at least cocky disregard for consequences – and things that can help you retreat at best just undermine your confidence and at worst can actually drag you down.

Lassie! Batman and a bunch of extras fell down that well again!

Think about what Christian “Weird Batman Voice” Bale learned when he was at the bottom of that totally not ridiculous giant well in the documentary Dark Knight Rises – if you have a rope around your waist you can’t jump as effectively to little Nintendo video game ledges. Yeah, he had a broken back and needed a knee brace 30 minutes ago but it was definitely the rope that was the problem with that climb.

It’s November and a lot of you are in the middle of your NaNoWriMo 30 day to 50k novels. I’ve been there. I’m cheering you on even as I work on my stuff in different ways. The best way to finish your first book, or your second book or your thirtieth, is to not even let not finishing it exist as an option. If you hit a snag, you find a way through/around/over it and keep going until the next snag because there will be a lot of snags and precipices and doubts and head colds. Even if it takes you more than 30 days – especially if it does – you just don’t stop. And after you finish your NaNoWriMo novel if you try to publish it and it doesn’t work? You don’t go back to your boat. You never go back to your boat. Eventually – and don’t be naive about it, it might take a LONG time – you will get to where you need to get if you’re stubborn and resilient enough. You might need to change directions and you might need to fall back a little bit toward your boat but when you do retreat, you only retreat so that you can march forward again. Burn your boats. Break your cauldrons. Cut your ropes. Forget backup plans. Write.