If you look at the post chronologically before this one you’ll see that it’s months old and that’s the longest gap I’ve really ever had posting things on this site. Which prompts me to tackle the question of why in this ever-so-brief return.

I haven’t been neglecting this site (and my also in arrears podcast, Rough Draft Out Loud ) because I’m not writing. I’m always writing. I’m always working. I’m a happy workaholic. When I watch TV with my wife and strange co-dependent chihuahua freeloaders, I’m thinking about stories. New stories. Old stories. Stories about tacos. Yadda yadda yadda stories. I’ve got a few novel-length things I’m picking away at, some older manuscripts I’m editing, and other sometimes non-sequitur plots and schemes. Nothing I want to post about right now. Which is the pivot to why I haven’t been blogging much lately: 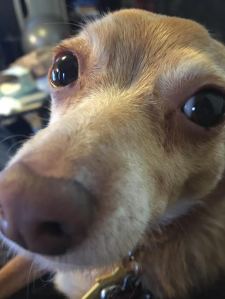 Creative work is different than other kinds of work. It requires a deeper level of honesty and engagement. A good creator doesn’t create because it’s been X number of days/weeks/months since the last creation. He or she creates because it’s time to create. There’s a funny balance between creating when the fickle muse comes to you and only then and creating so you can monetize your creation and pay for tacos but that balance is for the creator to figure out. It’s not for the audience. One of my favorite films of 2015 was Max Max: Fury Road. That was a pretty good movie right? It was good because the people making it put good work and energy into it. If they were just putting it out to fill a production schedule, I’m not sure it would have been all that great.

I’ve thought about this especially regarding my favorite old beardy writer man named George RR Martin. Martin isn’t done with his new Song of Earth, Wind and Fire book yet and the popular HBO series is now going to move past where the books are. This is disappointing and challenging to his devoted reader-base and I think that’s understandable. But do you want a new book or do you want a good book? Ideally you want both but Martin isn’t a factory and you can’t hire more people and make it go faster. He’s can create when he can create and he’s done when he’s done.

I’m not comparing my blog to Martin’s books and I know I have a much smaller base of people really clamoring for my nonsense (hi Mom!), but it’s a concept that not just readers need to understand – I need to understand it too. There have been times that I have put out blog posts (or podcast episodes…) that I was less than 100% engaged in because I felt like it was more important to have regularity than it was to have quality. Now, in our year of the Blade Runner replicant 2016, I see the error of my ways. Half-baked blog posts just to get views and trending lines burned me out a little bit and it led to material that didn’t live up to my standards.

So, when you or me see that I haven’t post on my blog for a few months and you or me wonder why that is – the answer is that I didn’t have anything to blog or say. And that’s okay. Now, I suggest you look at my pet chihuahua, and go back to my previous blog posts if you still want some good quality nonsense. I’ll post more but like LL Cool J says, don’t call it a comeback.